There has been a GP service in the West Malling area since 1848.  In those days the family doctors, based in West Malling, would cover an area of 100 square miles.

The original site of the doctor's surgery in Larkfield was a property called "Southcott’ on London Road in Larkfield, this is now the dental surgery.  At first it, was a branch surgery from West Malling and was leased by the doctors until 1954 when they purchased the old diary (named Thornhills) at 732 London Road in Larkfield (now a children's nursery).  Thornhills was our home for exactly 50 years until September 2004 when we moved into our brand new premises in Martin Square.

In the early days at the Thornhills site, the surgery occupied the ground floor and the first floor was a self-contained flat which housed numerous occupants over the years. 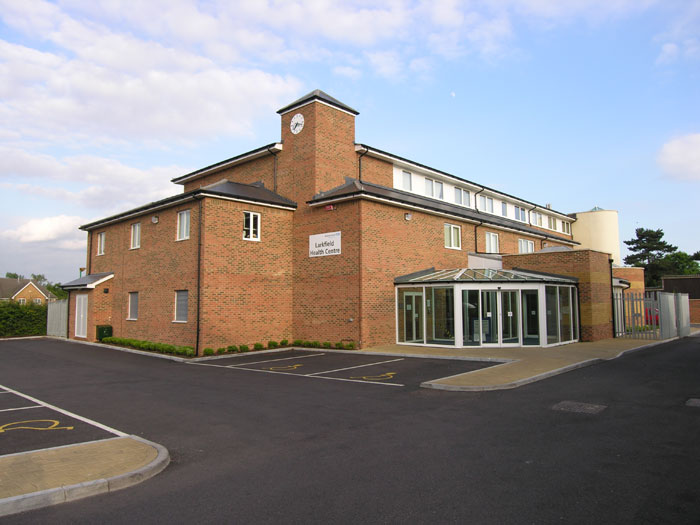 In December 1982 the West Malling surgery and Thornhills had grown to eight doctors.  It was decided to divide into two surgeries and Thornhills Medical Group was formed.

The building was first extended in 1959 and had seen several further extensions to accommodate a growing population.  By 1990 the building had been extended as far as possible yet the increased demand for medical services continued throughout the 1990s. We therefore made the decision to look for a suitable location for purpose-built premises.

In 2003 we eventually found a suitable site and we moved into our new building in Martin Square on 20 September 2004.  The premises incorporate the doctors’ surgery and the community health centre.

Larkfield Health Centre is jointly occupied by the local community service teams who form part of the West Kent Primary Care Trust. This enables us to work more closely with these teams and develop initiatives to enhance patient care.

At the same time we moved to our new premises, we took the opportunity to rename Thornhills Medical Group to Thornhills Medical Practice. Although we have only replaced one word in our name we feel it is an important change that clearly identifies us as a patient focused GP Surgery.

We have also had a new corporate logo designed.  The bird (Larkfield, Martin Square) in flight demonstrates our mission as a GP practice to develop services and progress onwards and upwards and strive to continually improve patient experience and services.

All you need to know about the services we provide

The NHS want you to have the best possible experience of care. Please give your feedback.

Care Navigation means our practice team will be able to direct you to the most appropriate health clinician for your needs first.